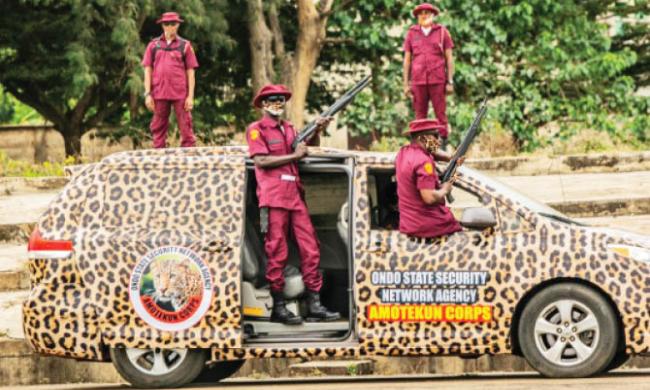 Some operatives of the Ondo State Security Network (popularly known as Amotekun) on Friday afternoon allegedly beat up some Northern youths who were passing through the state.

It was gathered that the youths who were passing through the state were intercepted around Gbeleaje Estate, Ilesha/Owo expressway.

They were however thoroughly searched by the operatives who found nothing incriminating on them.

A witness told SaharaReporters that after the stop-and-search operation, the Amotekun officials descended on the youths and flogged them thoroughly.

Their motorcycles were also seized by the operatives who later asked them to continue their journey.

“We initially thought they were bandits but they were not. The Amotekun people asked them to come down which they did, they searched all of them and found nothing on them.

“But to our surprise, they started beating them. They seized phones of those recording this act and deleted the pictures and videos. Someone asked why they were beating them when they didn’t see anything on them but they claimed the driver initially refused to stop, making them to waste their time.

“They now seized their motorcycles and put them in their vehicle. They now asked them to enter the truck back and leave. The excesses of these operatives are too much, you searched someone and found nothing, yet you started beating them. We all know what’s happening but torturing of suspects is even bad not to talk of innocent people,” a resident told SaharaReporters.

When contacted, Adetunji Adeleye, Commandant of the corps in the state said operatives were taught in the best practice on how to handle suspects and not expected to torture them.

“We don’t, we operate in the best practice in enforcing the law, if there are operatives that do that, then normal disciplinary action will be taken on such officers,” he told SaharaReporters.

Amotekun operatives in Ondo have in recent time come under fire for indiscriminately checking of mobile phones and laptops of residents of the state.

They were also accused of arresting drivers without licenses and impounding vehicles without tinted permits.