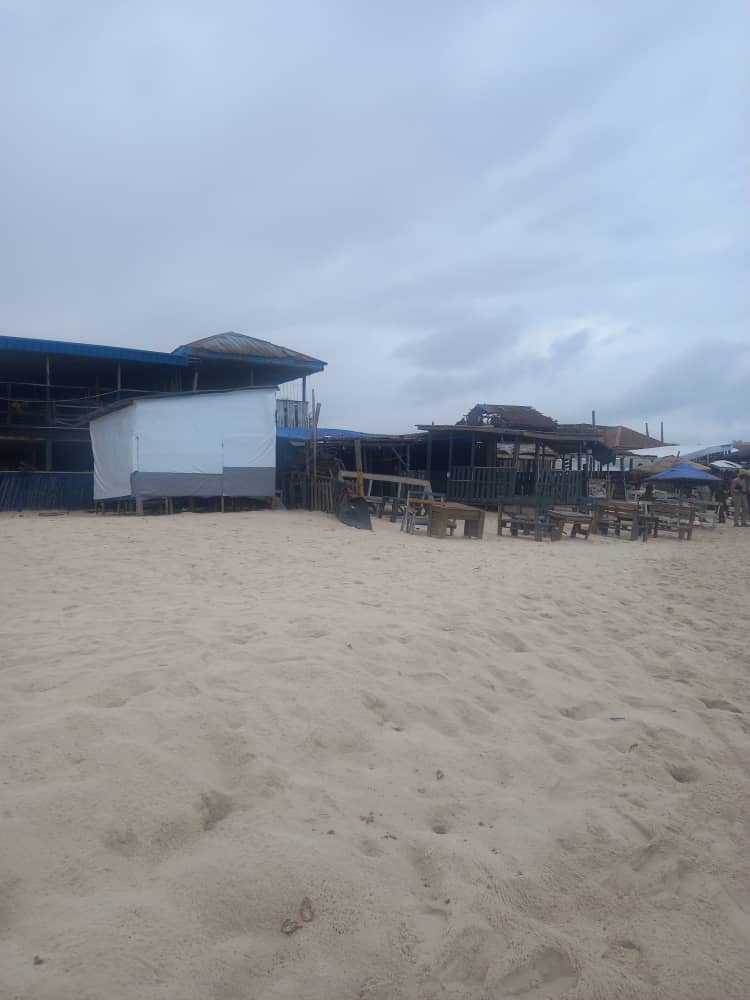 Located along Lekki-Expressway, Lagos, Alpha Beach, one of the numerous beaches that adorn the area, used to be the darling of many residents of the state and visitors alike.

Those were the days, when the beach had all the paraphernalia of a place of tourism, where people went to unwind and move closer to nature.

But this appears to be in the past as the beach has apparently lost its past glory. 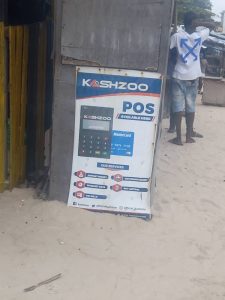 Those that have been to the beach in the past recalled what it used to look like, saying that the federal and state governments must do something urgently to avoid driving people away from the once upon a time conducive resort centre that used to attract tourists to the acclaimed center of excellence.

Visitors to the area appealed to both the federal and state governments as well as Governor Babajide Sanwo-Olu of the state to stem the tide of hooliganism in the beach area and return its lost glory, saying that the beach has the potentials of turning the state to tourism destination for fun lovers within and outside the state.

They emphasised that visiting a beach should evoke a sense of relief, a feeling of relaxation, which brings out a measure of joy that escaping from the hustling and bustling of the city provides. 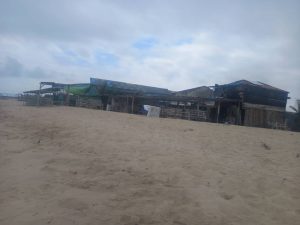 But a visit to Alpha Beach in Lekki Phase 2 area of Lagos along Lekki-Epe Expressway revealed the contrary. The beach has reportedly become home to all kinds of miscreants, hoodlums, urchins, bandits, criminals, drug addicts and drug dealers.

While visitors are made to part with some money before entering the beach at a makeshift gate manned by agents of “omo oniles,” (land owners.) nothing has been done to justify the fund being realised from the visitors with the uninviting environment of the beach.

The beach is mostly occupied by fierce looking young men, who have turned the place to home and who we were told torment members of the public round the clock, most especially at night.

The bad road leading to the beach has also become an avenue for hoodlums to operate freely as they take advantage of this to double cross vehicles with okada (motorcycle) and dispossess their victims of money, phones and other items, though the road is currently under construction.

“The road gives the bad boys opportunities to operate at night. As you are driving towards the beach area your vehicle could be double-crossed by these hoodlums on okada (motorcycle), and they would disappear after dispossessing you of your money, phones and other possessions.

“You dare not follow them into their hideouts in the shanties in the beach. Some of the shanties are occupied by prostitutes. They also serve as home for these bad boys, who use them as cover after robbing their victims of their possessions.

“The Federal Government, the Lagos State Government and Governor Babajide Sanwo-Olu of the state should please help us send these hoodlums away from the beach.

“The various security agencies should also beam their searchlights on the beach as the place has become a den of armed robbers, thieves, urchins, criminals, bandits, drug addicts/dealers and cartels. They have a lot of mercenaries flowing into the area from Mushin, Agege, Lagos Island and other parts of the state,” said a source.

Sources also alleged that the beach has become a route of international drug cartels that are shielded by compromised security agents, who are also drug addicts and have turned the deal into a money making venture.

“The security situation in this area is a threat to Lagos State. The federal /state governments and security agencies should act fast before it is too late.

“People in this area live in palpable fear. Alpha Beach is breeding something close to Boko Haram and once it becomes full scale the state would be the loser.

“There was the case of a boy, who was brought to Nigeria from the United Kingdom so that he could be reformed from drug addiction.

“But surprisingly, the boy left home for about four days and he was later found amongst the drug addicts in the beach, which offered him an opportunity to go back to his old life of drug addiction. So, the beach has become a bad influence to the children in the neighbourhood,” said a source.

A visit to Alpha Beach revealed that there is need for the state government to urgently demolish the various shanties and slums that serve as hideouts for the miscreants, criminals and drug addicts in the area as they have become security threats to visitors and residents of the area.

There have reportedly been several cases of armed robbery attack, stealing and vandalisation of properties around the beach.

A visitor to Alpha Beach recalled how his vehicle was vandalized, when he went there to relax with members of his family.

The man, who simply gave his name as Temilola, said his vehicle was forced open and properties stolen by the miscreants, when he went to the beach to relax.

“They took away a bag containing cash and documents, and they also stole my laptop and car stereo. I regret visiting the beach that fateful day. We left the place shattered with a vow never to return to the place.

“Even the stench from the shanties was something else. Moreso, we were disturbed by some dirty boys, who insisted that we must give them money. I actually consented, not knowing that my vehicle had been vandalized,” he said.

On what should be done to make the beach safe, Temilola urged the state government to get rid of the shanties and miscreants, who he said are spoilers to the fun the people would have derived from visiting the place to unwind and move close to nature.

Past efforts to get the federal and state governments to intervene and clear the beach of miscreants and hoodlums reportedly failed, which gave rise to the renewed call for the government to pay attention to the area before it gets out of hand.

Those that have visited the beach insisted that it is a time bomb waiting to explode, saying that the situation there requires urgent attention from the government.

According to them, it is not an insurmountable problem, adding that it is not beyond the powers of both the state and federal governments, which they urged to draft security agents into the area and constantly keep watch so that the hoodlums would be evicted from the area on a permanent basis.

According to them, the situation would be worse if it is not nipped in the bud before the completion of the road leading to the beach from the Lekki-Epe Expressway.

“When the road is completed it would be easy for the hoodlums to manouvre after operating with okada and escape into the thin air. So, it is better the situation is addressed once and for all so that the beach would be attractive to the residents of the state.

“it is when you visit Alpha Beach at night that you will appreciate what is going on there. It is something else at that time and the few security men that sometimes come around are not enough to handle the situation.

“The federal and state governments should not relent in flushing the area and making it conducive for the people once again as the place has completely degenerated from what it used to be many years back,” said a constant visitor to the beach, who pleaded anonymity.