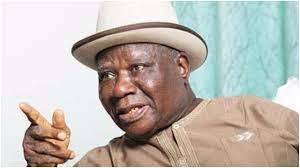 Southern and Middle Belt Leaders Forum (SMBLF) have cautioned political parties and political stakeholders not to tinker with the issue of zoning and rotation of political offices especially, the presidency.

SMBLF particularly took exception to a recent statement credited to the Chairman of the Northern Elders Forum, Alhaji Ango Abdullahi that zoning is “dead and buried”.

SMBLF said, “it is rather unfortunate and absurd that Ango Abdullahi and his Northern Elders Forum would make such twaddle.  Are they now ready to dissolve the country? What has happened that zoning, which has been a _sine qua non_ in the nation’s political progression has now become a “dead and buried” issue, in the irrational contemplations of Ango Abdullahi and his co-travelers?

“Could it be due to the incapacity, insipidity, and disastrous performance of the Buhari administration or the narcissistic desire to perpetuate Hausa/Fulani hegemony?

“It has become necessary to underscore that Ango Abdullahi, with his established disposition of inconsistency and duplicity, is one of the people disturbing the polity and peace of Nigeria. A few days ago, this same Ango fumbled with the idea of a so-called consensus arrangement for northern presidential aspirants, he has not come out of it, now he has sprung up with this reckless statement that zoning is dead, and buried.

“The history of zoning between the North and the South is well-known to everybody in this country and has been respected by all the major political parties in Nigeria. In the Second Republic, the National Party of Nigeria, NPN, adhered to the policy of zoning. The People’s Democratic Party (PDP), has also, since its formation in 1999, adhered to the zoning of principal elective offices.

“Most recently, in 2018, the PDP firmly observed the zoning arrangement by having only northern aspirants participate in the party’s presidential primary, which was held in Port Harcourt.

“Before then, all the PDP Presidential Aspirants (except David Mark, Aminu Tambuwal, and Datti Baba Ahmed), and Aspirants of other political parties, had interactive engagements, individually, with us, the Southern and Middle Belt Leaders Forum, to expound their plans for Nigeria, which was supported by the Northern Elders Forum headed by Ango Abdullahi who now wants zoning to be thrown overboard.

“Likewise, for the APC, only Northerners contested the first presidential primaries of the party in 2014, in Lagos, including Muhammadu Buhari, Atiku Abubakar, Rabiu Kwankawso, and late Sam Nda-Isaiah, except Owelle Rochas Okorocha who has become a routine presidential aspirant since 2003.

“More so, earlier this year, the nation and global audience were told by Governor Nasir El-Rufai of Kaduna State on a national/satellite Television station, Channels Television, that zoning of the party and political elective offices exists in the APC. The Governor further hinted that all the positions earlier held by the North would be swapped with the South and vice versa. And this was inclusive of the presidency. That was the reason why only Northerners vied for the National Chairmanship of the party, which was zoned to the North and micro zoned to the North Central, during the party’s National Convention in March this year.

“Sadly, we are now been told by the newly “imposed” National Chairman of the APC, Senator Abdullahi Adamu, that the APC has not decided on the zoning of the presidency. Such a statement at this stage, with about 30 days to the presidential primaries, amounts to outright dishonesty and chicanery. Who are they trying to deceive and who will allow them? It becomes even more upsetting given the fact that the statement came from someone who himself emerged as National Chairman of the APC through the policy of rotation and zoning.

“More importantly, the APC Constitution, under article 7, relating to its aims and objectives, commits the party to firstly, “promote and foster the unity, political stability and national consciousness of the people of Nigeria.” The question then is would the dumping of the zoning policy foster unity, political stability, and national consciousness in Nigeria?

“The APC National Chairman, Senator Abdullahi Adamu, ought to know better because he has been in the nation’s political space for quite some time, since the Second Republic, and should have a broad understanding of the political interplays that have sustained Nigeria’s oneness to date. Thus, should not dance to the drumbeats of political pillagers but rather, as National Chairman of the ruling party, firmly uphold the patriotic and democratic considerations that have kept Nigeria together as a country.

“It is pertinent to recall that Adamu was a pioneer member of the National Party of Nigeria (NPN) and became the first State Secretary of the NPN in Plateau State and later State Chairman of the party in the State. He was also a founding member of the People’s Democratic Party (PDP) and became Governor of Nasarawa State between 1999 and 2007.

“At the end of his two-term governorship, Adamu was appointed Secretary of the Board of Trustees (BOT) of the Peoples Democratic Party (PDP) and later won election to the Senate under the PDP in 2011.

“Before he decamped to the APC in January 2014, joining four northern PDP Governors including Rabiu Kwankwaso of Kano, Murtala Nyako of Adamawa, Abdulfatah Ahmed of Kwara, Magatakarda Wamakko of Sokoto as well as  Rotimi Amaechi of Rivers state and several other notable northern PDP members including Alhaji Atiku Abubakar, Dr Bukola Saraki, Governor Aminu Tambuwal, among others who had staged a walkout at the PDP Convention in 2013 because of zoning, which they felt then President Goodluck Jonathan refused to respect.

“Quite unfortunately, these are the same people who are opposing zoning today, because it does serve their purposes now. It is preposterous, they pretend to have a short memory when it pleases them.

“It is also necessary to note that the “marriage” between Abdullahi Adamu and Muhammadu Buhari is suspicious because Adamu was a bitter enemy of President Muhammadu Buhari during the APC presidential primaries in 2014. What could be the reason for their newfangled cordiality is it because of their plan of burying zoning to perpetuate the northern “Rulership” of Nigeria?

“It is haughty for anybody to say that this is the time to consider the quality of candidates. Where in Nigeria is deficient in quality candidates, is it the south or the north? Every one of the individuals from the south who has indicated interest to contest for the presidency, both in APC and in PDP, is qualified to be President of Nigeria.

“They should stop their trickery, enough is enough! We cannot have a northerner president for 8 years and then welcome another northern president for another eight years or more. That is unacceptable to us.

“We, therefore, strongly caution all our governors, former governors and top politicians not to accept the Vice Presidency nomination from any northern presidential candidate.

“We urge the 17 Southern Governors, who unanimously declared that the presidency must come to the South in May last year, at Asaba, Delta state, to remain resolute. They have our absolute support for the Southern and Middle Belt Leaders’ Forum and we stand firmly by them. This country belongs to all of us!

“Let everybody take this as a serious warning that the issue of zoning cannot be swept under the carpet; it cannot be dead and buried, if zoning is buried, Nigeria is then buried. And if they are thinking that this is a joke, let it be known that it is not. If we cannot abide by the established principle of rotation and zoning between the north and south, then we should not continue with one Nigeria; we should go back to what we were as a people before the amalgamation of 1914.

“We also earnestly call on the people of the Middle Belt Region and all minorities in Nigeria to wake up and work conscientiously with the Southerners, if we do, the prospects will be pellucid. This was demonstrated at the National Conference of 2014 to the mortification of those who think this country belongs to them alone.”