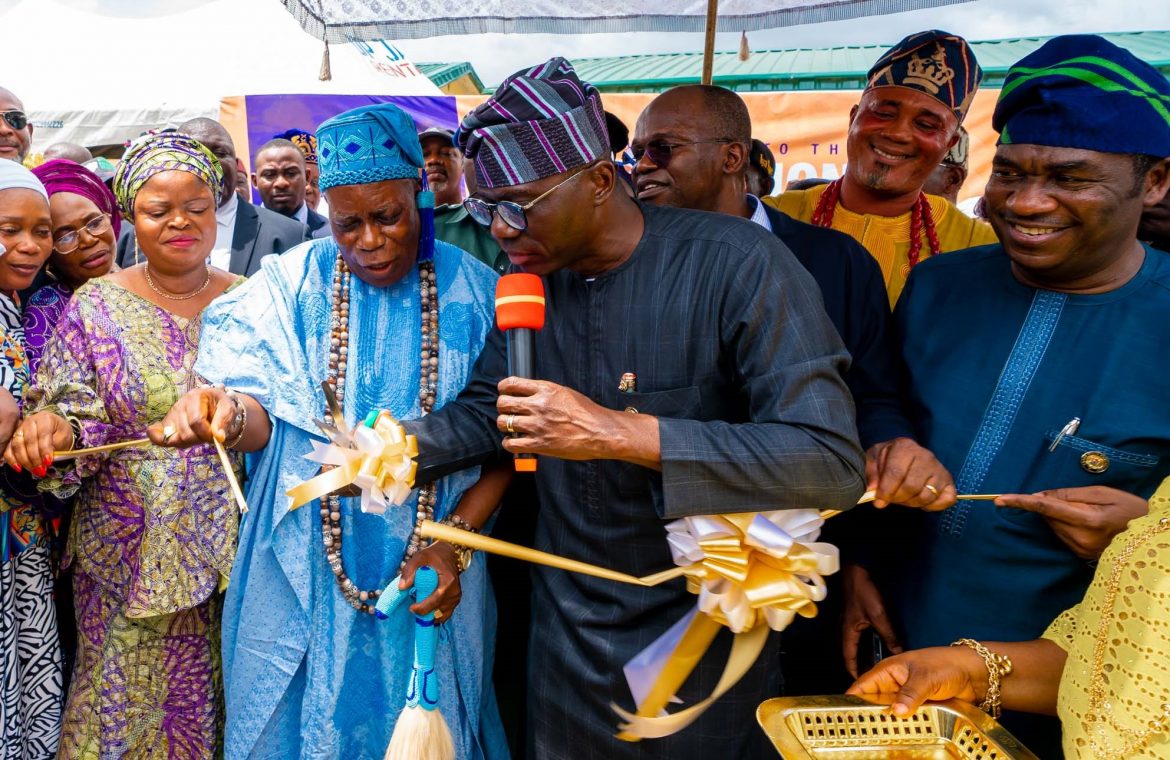 It was a day of the harvest of dividends of democracy in Epe, a fishing town in the eastern flank of Lagos State.

Residents braved the unabated Thursday downpour to receive Governor Babajide Sanwo-Olu, who was in the town for the inauguration of key constituency projects facilitated and delivered by the lawmaker representing Lagos East Senatorial District, Sen. Tokunbo Abiru.

The Governor commissioned a 960-capacity recreational facility built by the lawmaker with the support of Office of the Senior Special Assistance to the President on Sustainable Development Goals (SDGs).

Sanwo-Olu also inaugurated the remodelled Oluwo Fish Market, which was upgraded by Sen. Abiru to boost the trade and modernise vocation.

The projects, Sanwo-Olu said, are ones that will have direct impacts on the socio-economic reality of the town, praising Sen. Abiru for “diligently” representing the district in the National Assembly.

The Governor said: “Over the last 18 months, Senator Abiru has dutifully delivered the dividends of democracy in several areas and on multiple fronts, not just in the primary mandate of law-making, but also in terms of life-changing empowerment and endowment.

“Today, we are here to commission a number of infrastructure projects by him, some of which are facilitated through the Office of the Special Assistant to President Buhari on Sustainable Development Goals (SDGs), occupied an esteemed daughter of Lagos, Princess Adejoke Orelope-Adefulire.”

Sanwo-Olu expressed his delight on the benefit of the projects to the residents, noting that the market project was commerce-oriented, designed to improve the livelihood and earning capacity of beneficiaries. The recreational facility, the Governor said, is a project that would positively affect people’s lifestyle and translate to health benefits, as well as improved quality of life.

The Governor said the lawmaker had lived up to the ideals of the All Progressives Congress (APC) and to the legacy of transformation instituted in Lagos since 1999.

He appealed to the beneficiaries to see the projects as public resources entrusted in their care, urging them to productively utilise the facilities with the utmost sense of responsibility.

Sanwo-Olu used the occasion to appeale to Epe residents on the pace of work on the ongoing reconstruction of Eleko to Epe T-Junction, pointing out that construction activities on the highway remained on course and would be scaled up to meet the completion deadline.

The Governor said the ongoing rehabilitation of Oke Iwo-Marina Road in Epe town would be completed and commissioned in the next two months, adding that the State Government had awarded the contract for the construction of Mosafejo Road in Agbowa.

He said: “This is also what our great party, the APC, stands for, bringing a better life for all our people, regardless of their age, gender, religion or income class. Our goal is to ensure that no one is left behind, as we spread development around Lagos.”

Also at the event, Abiru empowered about 1,250 market women and traders with the sum of N50,000 business grants. Market leaders across the 16 Local Government Areas (LGAs and Local Council Development Areas (LCDAs) in the district selected beneficiaries from each of the councils.

The lawmaker extended the empowerment to 200 farmers who received hand-planters, along with business grants of N20,000 each.

Abiru said he took up the assignment with a determination and passion to improve the lots his constituents and elevate the socio-economic condition of the people, thereby complementing the efforts of the State Government.

Aside sponsoring 13 private member bills and co-sponsored three other bills, which included motions, the lawmaker said he had prioritised three key pillars of legislative role, empowerment and endowment to deliver dividends of democracy to his constituents.

He said: “I publicly acknowledge and appreciate the magnanimity of the presidency, through the Office of SDGs, for the projects we are commissioning today. These projects, which also include support for market women and rural farmers, are part of the fulfillment of social contract I solemnly had with the people of Lagos East Senatorial District while seeking their mandate in 2020.

“The modest achievements I have recorded in the last 18 months in the saddle as a Senator will be sustained with more interventions that will directly impact the lives of our people. I shall maintain this daunting tempo of leadership and development, while also assuring my constituents of effective and quality representation in line with my ‘Doing Good’ mantra.”

Orelope-Adefulire applauded the lawmaker for making women empowerment as cardinal focus of his activities, noting that such action remained key to strengthen inclusion.

She said the Office of the SDGs in the presidency had facilitated rehabilitation of more than 10 schools and four healthcare projects in the district.

Inaugural football match was played on the pitch between Tokunbo Abiru Football Club and and Epe Alaro United.

Sanwo-Olu: we are committed to protecting our water resources, completion of Adiyan II water project